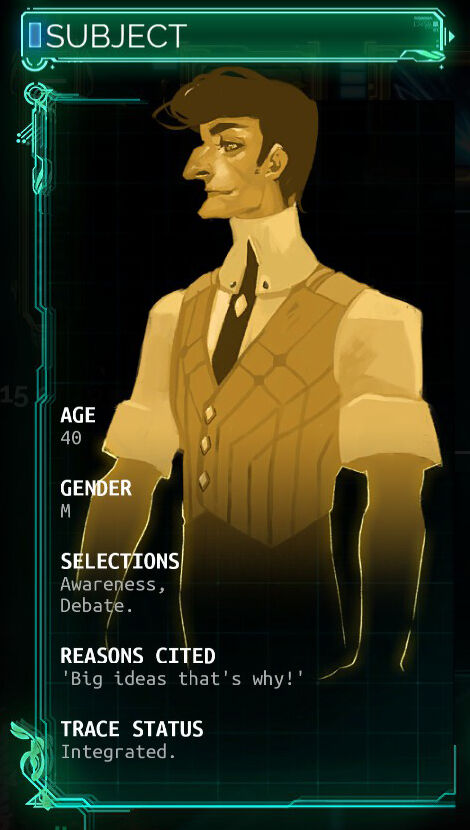 Mr. Wave Tennegan traded the quiet life of a sanctuary vicar to become one of Cloudbank's biggest alternative broadcast personalities for his distinct blend of good-natured mannerisms and incisive social commentary. Straddling the generational boundry between the old guard and the new, Mr. Tennegan offered a canny perspective on the many factors influencing the city's evolution. But during one of his many meet-and-greet events with his listeners, he met a group of individuals who would forever change the course of his life.

That evening, after his event drew to a close, Mr. Tennegan met members of the group calling themselves the Camerata. They invited Mr. Tennegan to come see what was really going on in his city, as long as Mr. Tennegan promised not to disclose any facts concerning the existence of the group. Mr. Tennegan outwardly accepted, for his curiosity could not be quenched. But he inwardly refused for his commitment to his listeners precluded the keeping of any such secrets. First, he would meet the Camerata on their terms.

As far as anyone knew, Mr. Tennegan took some personal time as one day his broadcasts simply stopped. He has never missed a day of broadcasting in his life and so his listeners, while disappointed, where very understanding and both happy and concerned for him. A significant majority believed Mr. Tennegan finally took a break as he often promised he would one day. Since then, Mr. Tennegan's young producer inherited his show, though listenership steadily declined to bottom out at just 22% of Mr. Tennegan's average.