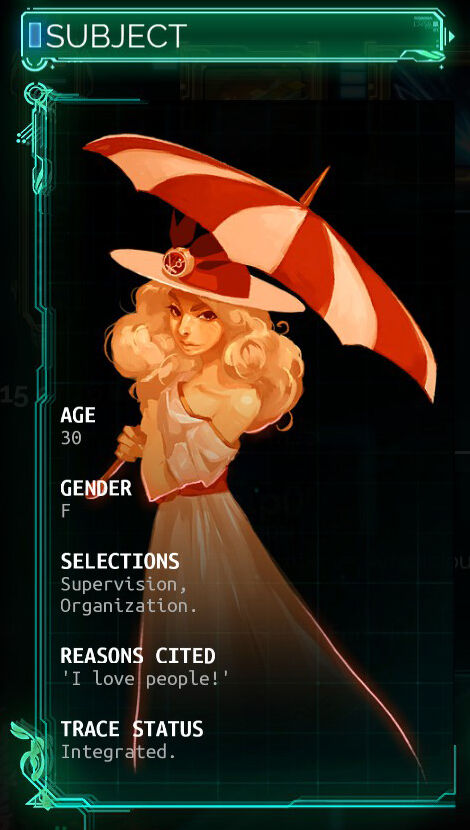 Sybil is described by the Transistor as being the "eyes and ears" of the Camerata. She seems to be the most social member of the group by far. She also appears to have had an obsession with Red for some time, and her subsequent attempts to get closer to Red are arguably the trigger for the events of the game.

Known in elite social circles throughout Cloudbank, Ms. Sybil Reisz organized many of the city's popular public events, from ground-breaking ceremonies to contemporary festivals. She was everywhere, and yet somehow she made time to lead a second, hidden life. As one of the Camerata, Ms. Reisz was responsible for gathering information about potential high-value targets, people who could contribute to their cause. She did this job to perfection, drawing no notice, though one target in particular caused her much frustration.

Ms. Reisz met Red while putting together a small program for up-and-coming artists, and became infatuated first with Red's music then with her. According to diary entries there was something inscrutable and confident about Red that Ms. Reisz could not explain. However, Ms. Reisz was frustrated to find that Red grew distant. Through all this, Ms. Reisz observed the aloofness of one of Red's companions, and decided he must have been insinuating Red against her. Ms. Reisz thought through various ways to rectify this.

One night Ms. Reisz nominated Red as a target for her Camerata colleagues, citing Red's surging popularity in the city and her unusual set of selections. Red could substantially advance the Camerata's agenda, and was not yet so ubiquitous that her sudden disappearance couldn't be sufficiently disguised. Ms. Reisz promised that the Camerata could get to Red at a time when she would be completely alone. Trace data reveals an 85% chance she falsified this claim.

The Encounter at Goldbank Auditorium 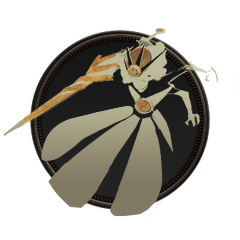 Sybil after succumbing to The Process

Despite Sybil's perfect record in scoping and spying the Camerata's assimilation targets, her emotions and obsession for Red ultimately led to her downfall, directly triggering the beginning events of the game. While Sybil's sexuality is never directly addressed, it is heavily implied that Sybil was in (unrequited) love with Red, based on her trace data, behavior and dialogue during the boss battle, and the lyrics to In Circles (which plays during the battle). She lied to her associates about Red being alone to try to get rid of Red's lover.

While her plan succeeded (against the cabal's wishes), the Camerata lost control of The Process. Either distraught by the outcome or foolishly believing that her relationship would somehow pan out, Sybil waits for Red at the Auditorium, where The Process eventually takes her. When Red finally encounters Sybil at the auditorium, Sybil has been 98% processed and is almost completely insane as a result. Sybil lashes out and attacks Red. She ultimately fails in the ensuing fight and is defeated. Following her defeat, Red absorbs Sybil's trace into the Transistor and discovers the whereabouts of the three remaining Camerata members, and she heads downtown to the High Rise.