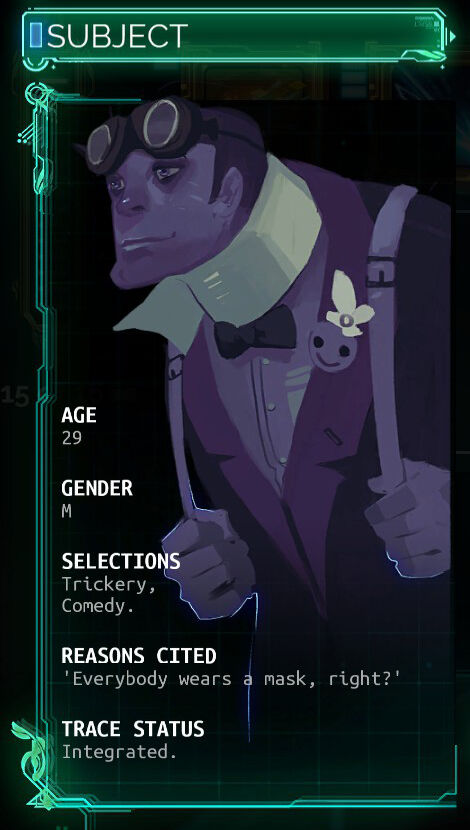 Considered the most elusive entertainer in Cloudbank by 12% of the population, Mr. Shomar Shasberg earned his reputation through numerous absurd public pranks and other daring or ill-advised feats. Thus he earned the nickname the Magician from his many thousands of fans, and enjoyed executing highly unusual unscheduled performances in Cloudbank's most bustling neighborhoods. His acts grew more ambitious over time, culminating in his promise to sky-drop into a restricted region of Goldwalk and walk right out, escaping administrative detection.

After constructing his personal glider, Mr. Shasberg sailed forth one evening from a Highrise rooftop, to the delight of thousands of onlookers at ground level. Onlookers lost visibility of him as he flew into the dense fog hanging over Goldwalk, though their cheering continued for more than 40 minutes. Mr. Shasberg, meanwhile, completed his sky-drop very much as planned. What he did not expect was that several individuals were waiting there for him when he touched down.

The Camerata saw in Mr. Shasberg someone who commanded a significant influence over a young and vibrant sector of the city's population. Mr. Shasberg, for his part initially mistook the Camerata for an administrative group, and was shocked and disappointed to have been located so easily. His famous escape attempts likewise proved unsuccessful in this particular scenario. Nevertheless, more than 80% of individuals who self-identify as fans of Mr. Shasberg's work believe that his disappearance was all part of the stunt.