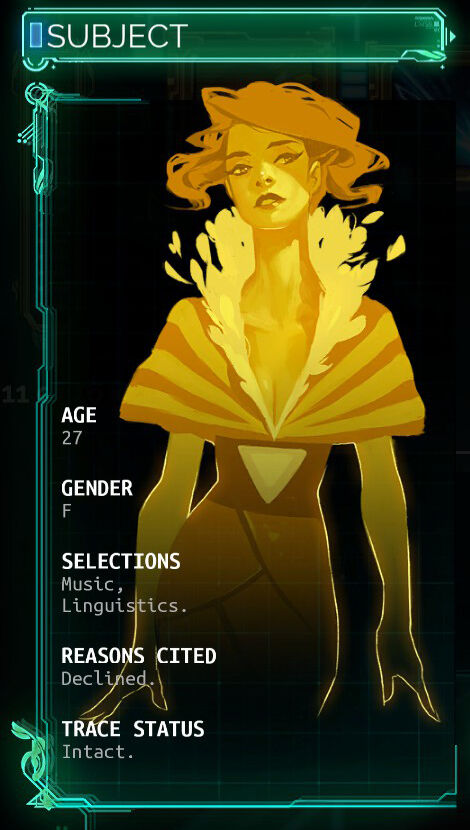 Red, a young female singer, has come into possession of the mysterious Transistor. The Transistor is a powerful talking sword. The Process wants both her and the Transistor and is relentlessly pursuing her.

Ranked in the top percentile of Cloudbank's contemporary performing artists for five years, Red demonstrated early interest in music despite studying at Traverson Hall. Traverson groomed many of the city's most ambitious civic planners, though Red spent the majority of her time developing the academy's nascent arts program, and was the first on record to select two nontraditional disciplines. Records indicate she was reluctant to explain, citing personal reasons. She remained reticent even after gaining the spotlight, and when asked about her past and influences, would often say her work spoke for itself. She did admit, however that she never wrote her music with intent to stir controversy.

To appreciate the impact of Red's music, consider first the current state of Cloudbank's social climate and how it evolved over the past two decades. When an altercation finally erupted in the crowd during one of her performances, it was the first such incident in four years. It escalated to the point where administrators were summoned to the scene. As one of the suspects was banned from the premises, he accused Red of being an instigator and provocateur. Red later stated it was in this moment that she fully understood the potent effect her music had on people. She decided to take certain precautions from that point, receding from the spotlight to compose new material in relative privacy. Rumors swirled. Then, once she finally re-emerged, trouble followed.

The Camerata found her one night once the crowds dispersed after one of her performances. They had reason to believe that she would be alone, rehearsing said new material. But she was not alone, and the presence of another individual disrupted aspects of the Camerata's plan for the night. Red survived the incident, becoming separated from the Camerata due to to these unforeseen events on their part. Although her trace data remains intact, partial transfer did occur, including transfer of ownership status of something the Camerata believed theirs.

Some of Red's songs found in-game include: