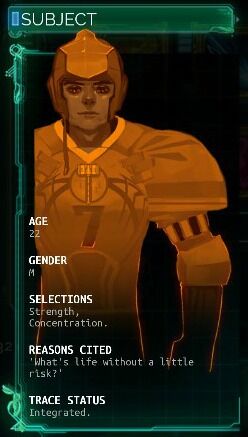 Very few are so well cut out for professional athletics as Olmarq, who famously corrected reporters anytime they addressed him using honorifics. As a rookie playing for the Highrise Hammers, Olmarq was a second-string quarterfielder, until a chance injury put the team's star out of commission, giving Olmarq his chance to shine. Any skepticism surrounding his qualifications quickly dissolved as he proceeded to lead the Hammers to a crushing 17-2 season; however, the following season proved an even greater surprise.

Olmarq gained a reputation for his dramatic yet reckless plays. He was very strong, especially for someone of his age and stature, which not only led to significant victories but also to many injuries on the field. Rival fans started calling him the 'cursed QF', as he inflicted some sort of injury to opposing team members in almost every match. This spurred controversy as to whether Olmarq was acting with intent or without control, with both possibilities being rather troubling. Moreover, the league sought new safety regulations affecting the pace and spirit of the sport, for which Olmarq felt personally responsible. When after one grueling match, a reporter asked what he made of his notoriety, Olmarq admitted he was considering retirement. Soon after an administrator whom he met after a high-profile win offered to help him make a comfortable arrangement.

To the Camerata, Olmarq was a way of 'hedging the portfolio', in the sense that his talents and selections differed significantly from others they sought. At the same time, he was by every means unique as an individual, and his physical conditioning provided a useful data point. The Camerata reasoned that for Olmarq to go away would ultimately be for his own good. Indeed it was; following his reported retirement, his career was celebrated and his transgressions quickly overlooked or forgotten.