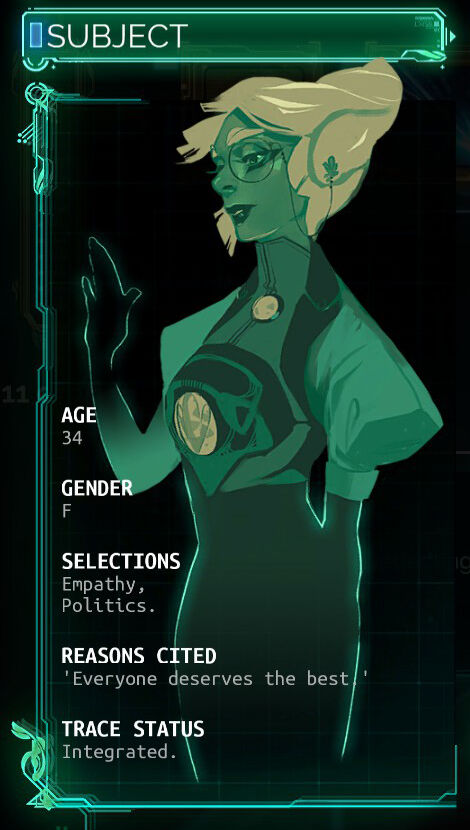 One would have difficulty finding a more active or outspoken member of the community of Cloudbank's Goldwalk district as Ms. Niola Chein. She allotted more than 66% of her available time on such activities as passing ordinances to improve underdeveloped regions, reaching out to and educating habitual nonvoters, or advocating for groups lacking adequate representation. Her motives were rarely questioned, as her love for the district was in fact sincere, stemming from positive early experiences that grew to become fierce nostalgia. Ms. Chein was not without detractors, however, and this became very clear at the opening she arranged for the Goldwalk Channel.

The Channel was to be a gallery space of sorts designed to showcase eclectic works from those pursuing nonstandard vocations that traditionally held little share. Instead, Ms. Chein found herself accused of stirring unrest by calling attention to meritless perspectives undeserving of notice. The group accosting her was angry for 17 different reasons in total, including how the Channel edged out a competing vote for a metro station that would have bridged the gap from Goldwalk to neighboring Highrise in one short ride. Ms. Chein publicly lost her composure for this particular incident, which would have escalated further if not for several individuals who stood in her defense. They later offered their support with any such matters in the future. She agreed to meet with them, not realizing who they were.

The Camerata saw in Ms. Chein an invaluable moral compass of sorts, someone predominantly driven by philanthropic goals and seeking no personal gain from her actions. This type of perspective they felt was important counter-balance in comparison to some of the other individuals they had in mind, whose work was no less significant to the city, but whose intentions were not as plain to see. After her disappearance, those who knew Ms. Chein reluctantly came to believe that the Channel incident shook her resolve enough to where she decided to go away for a while, to reignite her passions.