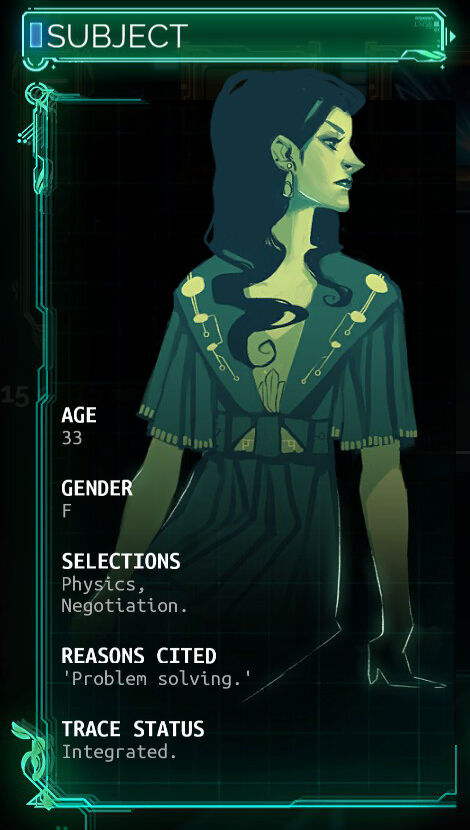 L. Platt was a woman who once lived in The City of Cloudbank. She was found dead by Red, and her soul was absorbed by Transistor, granting the Spark() ability. Her closest friend was Maximilas Darzi, who disappeared shortly prior to the events of the game. Because she did not believe that he would simply go somewhere else, she attracted the attention of the Camerata, who sent The Process to deal with her the same night that they attempted to take Red's life.

One of the preeminent scientific minds in Cloudbank, Ms. Lillian Platt was the youngest-ever individual to be elected as Chairwoman of the OVC Board. Under her leadership the number of OVC Terminals in Cloudbank more than doubled, and the quality of the broadcast strengthened more than fourfold. However, she then became the youngest-ever individual to leave the post, as she tendered a resignation in less than two years to pursue extracurricular interests. In private conversations, several of her former colleagues indicated that Ms. Platt left following the sudden disappearance of a close personal friend, Mr. Maximilias Darzi, who according to official OVC transcripts decided one day to move to the Country.

Personal records show Ms. Platt was preoccupied with certain rumors and urban legends concerning an unusual phenomenon sighted in the northwestern corner of the city, and possible connections between this and the rash disappearances during the past 12 months. For undisclosed reasons she did not wish to involve the authorities. Her access to privileged OVC information may have contributed to her decision. Other records show she engaged in clandestine discussions with individuals claiming to have knowledge of the circumstances surrounding her friend's disappearance. She arranged to meet with them one night at an unmarked port near Goldwalk Bay.

Ms. Platt never learned the truth about her vanished friend, although in a brief moment she did learn the truth about the unusual phenomenon. To the Camerata, Ms. Platt was more of a meddler than an opportunity, one of a scarce few who held some knowledge of their movements. When the time came, they made sure that they were nowhere near her last known location. According to OVC, Ms. Platt has been missing for more than two weeks, and the trail has gone cold. Incidents of foul play have occurred less than once a year on average for the last 10 years, but the authorities have not yet ruled it out in this case.