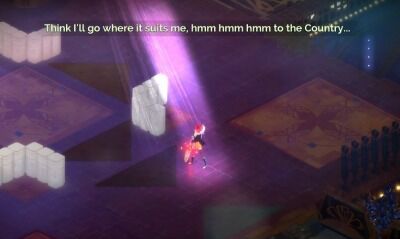 The Transistor attempts to sing along.

By holding the Hum button when stationary, Red will stop what she's doing, cradle The Transistor, sway gently, and hum a song, which is determined by her location. A "spotlight" will also shine on her, wherever she's standing. This ability is first pointed out upon reaching The Empty Set before encountering Sybil Reisz, where Red hums a song on her former stage and triggers a cutscene. This ability can be used in almost any area (while not in combat), and generally has no effect besides a few particular situations.