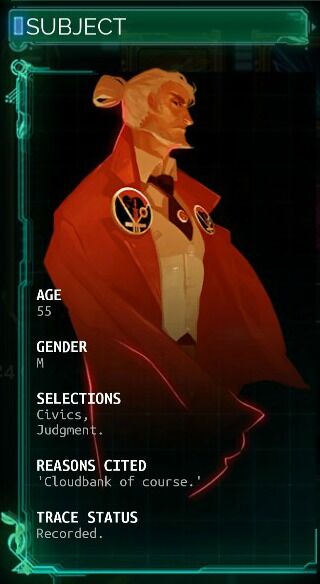 Grant Kendrell is a citizen of Cloudbank, its longest-working administrator, and one of the founding members of the Camerata. He's married to Asher Kendrell.

More than 94% of voting adults in Cloudbank agree that administration is necessary to the city's infrastructure and its continued day-to-day operations. A similar percentage also wants no part of administrative responsibilities, other than to exercise one's personal right to vote on or otherwise contribute to pertinent social issues. Most administrators like it this way. In the long-standing tradition of their role, they endeavor to keep things running quietly and smoothly, intervening as little as possible while facilitating as much as possible. As public servants, administrators are beholden to their constituencies through this time-honored system. It is a system that Administrator Grant Kendrell decided to subvert.

Administrator Kendrell was one of the longest-tenured public servants in the administration's recorded history. More than two younger generations of administrators came and went as he remained on the job. His abilities as a judicious and sharp-minded administrator never faltered as his age advanced, so instead, his constituency's respect for him only grew. By contrast, Administrator Kendrell found his own feelings beginning to change. It was a period of crisis, a time when lesser men would have retired, but Administrator Kendrell took it all in stride as far as anybody knew. By now he had realized he had fought for virtually every social position at one time or another, always pleasing the majority. Over time this left a hollow feeling in his heart. He had his own position on many matters, his own dreams and desires. But he had learned to keep those thoughts in check. Then a longtime friend of his, with whom he often confided his worldview over food or drink, gave Administrator Kendrell an idea he never dared consider.

The Camerata was just the two of them at first, and its ranks were never meant to exceed a number to be counted on one hand. They encapsulated their beliefs in an expression, that when everything changes, nothing changes. And they had in their possession something that would move their mission forward. Administrator Kendrell, ever familiar with the solemn burden of responsibility, knew more about the administration than anyone. If anyone knew what was best for Cloudbank, it was him.

After the initial events of the game, Grant and Asher eventually flee to the top of Bracket Towers with The Spine of the World protecting them from The Process's influence. Midway through Red's climb of the tower, Grant has already ingested poison and dies. Asher follows suit soon afterwards.

Because Grant dies before meeting Red and does not speak to Red, Grant is the only Camerata member who does not interfere with Red in anyway.