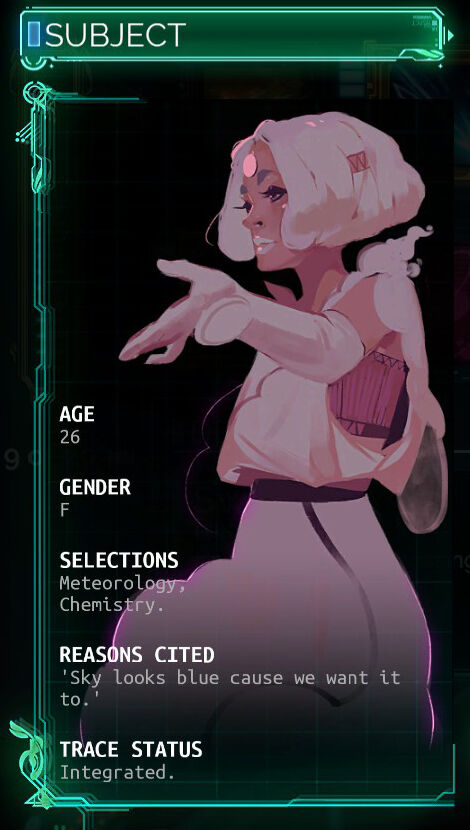 She was Cloudbank's first-ever skypainter, someone who took the everyday occasion of the ever-changing sky and made an art of it. She worked for the pleasure of thousands, who remembered they once took the sky for granted. Ms. Yon-Dale gained a significant following as she transformed the skies around the city, and as her skill and popularity grew side by side, she started taking requests. One such request came from her heart: She was drawn to the district of Goldwalk, where her suitor lived, and there she would change the horizon to shimmering sapphire for the solstice, and for their and everyone's sake. This was when her art became a liability.

Administrative restrictions over the northwestern part of Goldwalk conflicted with the breadth of the sky that needed painting. Because of her physiological state, however, Ms. Yon-Dale disregarded the restrictions and painted away. The result was stunning, as the majority of onlookers failed to find words to describe it. But because Ms. Yon-Dale wantonly ignored a front page directive from administration, she was banned from skypainting for a term 2.5 times longer than she found acceptable. She petitioned for reprieve, and came in contact with an administrator who suggested there were ways the term could be lightened. She was eager to learn how.

Ms. Yon-Dale's gifted command over a dimension of the city's physical and natural beauty caused the Camerata to seek her out. While aspects of the city evolved at a constant rate, the particular way in which Ms. Yon-Dale approached her craft -- with a strong, discerning, intuitive sense but with an eye for the wishes of her followers -- created a particular disposition that appealed to the Camerata. After she vanished, close the 70% of Ms. Yon-Dale's connections decided she must have fled the district to escape sentencing, and that somewhere out there the skies still sparkle with the patterns of her choosing.