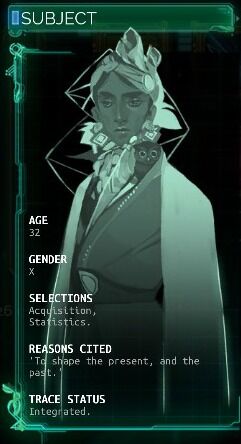 Ms. Bailey Gilande was never one to follow the pack. Due to a variety of social challenges she experienced early on, she grew to care much more about the past than about the future. While this preoccupation at first made her reclusive as a person, in time it flourished as an invaluable skill, which put her at the forefront of a movement to fundamentally rework the city's outdated and incomplete archival system. Then one day, Ms. Gilande received a message from her local admin branch, extending her a preapproved opportunity to be head of the city archives. She accepted on the spot.

Ms. Gilande's propensity to look at and find truth in historic fact patterns made her excel at evaluating possible decisions about the future. She was well regarded for her objectivity and fairness. Any time a new civic initiative was proposed, Ms. Gilande could cite relevant historical data that put the initiative into context, and ultimately let those involved move forward with confidence. She became one of the administration's top consultants. So, in spite of her demeanor, she was not surprised when she received an invitation to a private banquet in honor of individuals who gave the most to Cloudbank.

Ms. Gilande's surprise came later when she arrived at the site of the banquet to discover the event was only in her honor, and that it was not a banquet at all. The Camerata identified Ms. Gilande as having a wealth of knowledge about the city's inner workings and 'an agreeable non-confrontational attitude', which gave her success in her professional interactions. Ms. Gilande led a very private life and had no significant interests outside of work. So, when she failed to show up for her duties one day, her colleagues were very troubled, but found no leads to her whereabouts. She never told anyone of the banquet.