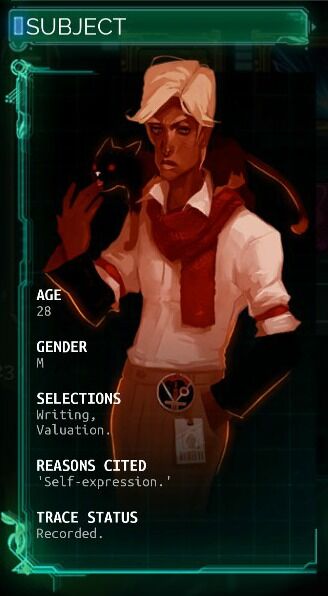 Asher Kendrell is a citizen of Cloudbank, an editor for the OVC, and a member of the Camerata. He is also the spouse of Grant Kendrell. Red meets him at the Bracket Towers, and the two communicate through OVC terminals. Asher provides a great deal of information about the Camerata and their motives before Red reaches him (and Grant) at the top of the roof.

Most children learn to stop asking 'why', but Mr. Asher Kendrell never outgrew it. His hunger for knowledge and his eagerness to spread it made him a prolific writer, who enjoyed a career as a culture-and-current-events editor for OVC. When Mr. Kendrell wasn't busy reporting, he occupied himself studying the history of his city. But the deeper he delved, the more frustrated he became with all the dead ends and contradictions. The facts simply did not add up, so he started piecing together the unwritten history of Cloudbank. He conducted interviews with venerable members of society, those who willingly worked past retirement age or could speak first-hand about the past. The most remarkable among them was an administrator.

Mr. Kendrell continued writing for OVC, now with an ulterior motive, having joined the administrator's inner circle. The administrator needed someone like Asher to help keep a low profile, someone who could speak directly to the hearts and minds of the population, and truly understand their needs. That way, they could conduct their work in service of the people. Cloudbank would enter a new era.

Asher met Grant while piecing together his "unwritten history", and the two had a relationship. They eventually married, one taking the other's surname. (Most likely Grant's surname, as he was older and more respected.)

Grant introduced Asher to the Camerata, and joined them as their third member. At this point, he was deeply involved with Grant, so Grant almost didn't give him a choice. But Asher fully accepted the principles and ideas of the Camerata.

During Red's climb of the Bracket Towers, Red finds recorded messages in OVC terminals, and Asher communicates to Red in real time. Asher and Grant have locked themselves away in the top of the tower, with the The Spine of the World protecting them from The Process's influence. By the time Red enters the tower and talks to Asher for the first time, Grant has already taken a poison or is at least talking about suicide. During one of their last conversations, Grant has already died. Asher takes the poison shortly afterwards, following him "into the Country".